…but when I say my boys, I mean the four legged equine sort.

Since the age of eight I have ridden horses and ponies. And for all those years I was never graced with owning my own. 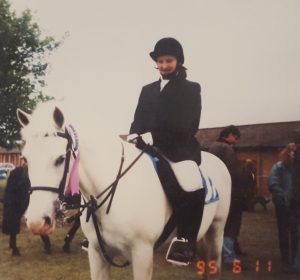 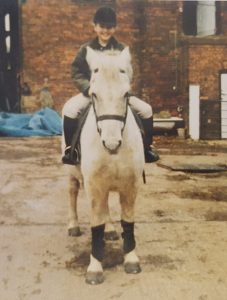 My parents always said we couldn’t afford one and this may well have been true but I think the commitment of owning a horse was something my parents didn’t want to get involved in also. They supported me in taking me here, there and everywhere when it came to the horses but paying for and looking after one every single day and night was not on their agenda. My dad also loved his foreign holidays and it was bad enough getting someone to look after our dogs let alone a horse too, so I guess I was always destined to be a rider of someone else’s horse or pony.

Until 2011, when after moving out of town and into the countryside. I was already riding someone else’s horse when the opportunity came for me to buy and look after my very own. 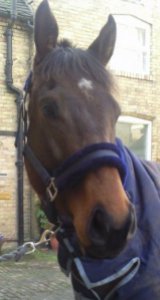 Olly was a handsome thoroughbred gelding, 5 years old at the time and just 6 months retired from the race track. The day I brought him home was the day I could have burst with pride. I had my OWN horse, finally, at 30 years old, I had my very OWN horse!

He needed re-schooling but other than that he was lovely and gentle both under saddle and on the ground.

I continued to have lessons on him and we even went for a fun ride with the local Hunt, which was very entertaining indeed.

Twelve months later our pony, Jakey, an 11hh grey welsh section A arrived. Initially he was going to be mainly a companion for Olly but he was an ex-riding school pony and so our children started to ride him on a weekly basis.

In Spring of 2013 the hubby and I realised we were in more debt than we had anticipated. I won’t go into detail but we were almost made bankrupt. I couldn’t afford to officially go bankrupt because of future career aspirations and so we sought help via the government website and came across Step Change, whom were very good and planned to manage our debt over a 5 year period.

Both Olly and Jakey had to be re-homed. Sadly Olly got sick during the winter of 2012 and for the last 6 months of his time with me I was having vets poke and prod him and he had to have a special diet to help with what we thought was a gastric problem of red encysted worm infestation (despite a regular worming treatment) and ulcers which may have formed during his time as a race horse. 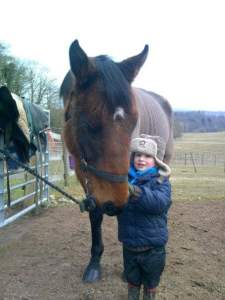 Olly lost a tremendous amount of weight and he developed rain scald which I didn’t realise until it was too late, so I was having to treat him for both ailments. If I tried to sell Olly he’d no doubt end up at a slaughter house like so many racehorses so I chose to contact some horse charities and ask for their advice instead. After careful consideration the Blue Cross Horse Charity decided they would take him, rehabilitate him and re home him as a riding horse. It was arranged.

Jakey being an adorable children’s pony was re-homed on a permanent loan basis and I still keep in touch with his new owners today.

Signing Olly over to the Blue Cross broke my heart. I can still remember the day I had to walk him up the trailer ramp, tie him up and then watch him being driven away whilst neighing his head off to us. I broke down!

I’ve not been the same since. I’ve suffered a mental breakdown, depression and now anxiety which I am sure are all spurred on by losing my boys. If any of you have ever had to give up a much loved pet or lose a family member then you can understand the loss and the heartbreak this causes but until you’ve experienced it you can only half imagine it.

There has been a problem with your Instagram Feed.