It has been another week of feed, check over and run I’m afraid as work has started to pick up and the children seem to have more and more going on in their social life than I do, so I end up being a taxi.

Anyway, Monday (5th) was a special visit because my daughter who is 11yrs old came with me to visit the horses. She’s not as horsey mad as I was at her age but that could be a good thing, right?! We didn’t have her wellies in the car so she just had nose rubs with Olly over the gate, here are a couple of pictures to show you…

The snow has gone now but the rain has arrived so the mud in the field has started to churn up around by the gate which is a nightmare when you need to quickly feed and run but the boys understand and don’t mind walking behind me to the better part of the field.

One thing I have noticed this week is that when Toffee comes closer to Olly whilst he is eating he has started to allow him to hoover up the leftover feed that Olly knocks out his bowl. It’s not everyday he lets him do it but I have noticed him allow Toffee to be around a foot away from his bowl on a couple of occassions. 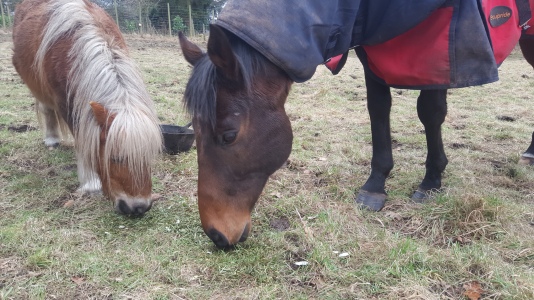 Eddie has also been having snuggles from us when we have been going up but I have not always had the phone to hand to take one of him and I so here is one for you.

I also caught them both having a lick of the salt lick this week which is good. They must be lacking in salt if they go and have some so I’m really glad I have one in the field for them to go to. It’s so a funny when they get into it as they both make such a slurping noise.

Finally on Thursday we saw the sunshine come out for a while which was a lovely surprise. The horses were certainly glad for the break in the rain.

What a lovely view we had, don’t you agree? 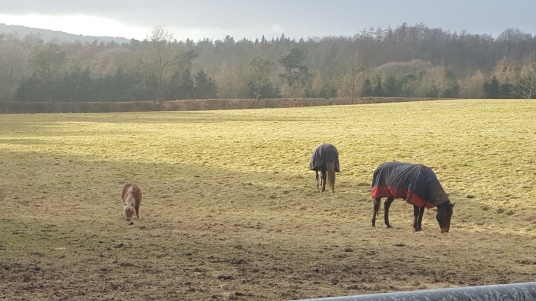 My Business Is Out Of Action

There has been a problem with your Instagram Feed.