A Journey Of Self Discovery, Business and Family Life.

On Sunday I took Olly for a little walk around the grounds of the farm to 1) give him some exercise and 2) start to become familiar with his surroundings, ready for when we go hacking out. 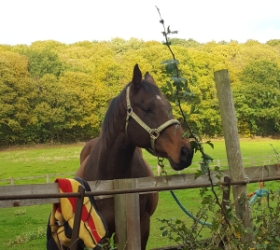 Olly was pretty calm to catch, groom and get prepared for his outing but as soon as we stepped out the farm gate and towards the woodland he then became the typical Thoroughbred I remember; snorted and kind of side dancing everywhere.

Lailah walked on in front or beside us at a safe distance just in case Olly spooked.

I remembered back to when I had him first time round and rode him for the first time, he was so flighty then.

We walked up the edge of a field towards the woodland entrance which then enclosed upon us with tall pine trees and scrub around our feet; descending down a gentle sandy track towards a valley was just magical in itself.

Ahead of us were two large piles of logs cut from the woodland presumably to be cut into fire wood, Olly stood in his tracks and started snorting at the air as if to sniff out the monsters lurking behind the logs. With some gentle encouragement he walked on past the log piles.

Beyond the logs the valley opens up with a grass hill on one side. I decided that Olly had been good enough to turn back now as I wanted to end the walk on a good note rather than he be too stressy but before we walked back to the farm I let Olly graze a little. 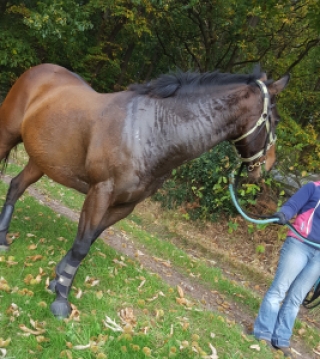 Something made him shoot his head up from grazing and with a little squeal and a neigh to his friends back at the yard he raised his tail, swung his neck, did a cheeky buck and then pranced round on the lunge line. He wasn’t scared nor ‘playing up’, he was just flighty so I let him have his fun and just steadied him when he tried to go too fast.

After about 5 minutes of this I brought him back to a standstill gathered up the lunge rein and patted his neck. He had got himself into a bit of a lather which can only be good for him and his weight loss. 😅

A brisk walk back past the log piles (not fazed this time) and back up the hill into the wood and out the other side to the field, Olly was neighing to his partners in crime.

Once back at the yard I hosed Olly off, scrapped the excess water off then put a sweat rug over him to help dry him off. It was quite a nice day and not chilly at all so a good 20minutes or so later he was pretty much dry and cool enough to go back into the field.

What an adventure that was, I can’t wait to do it all again!

Riding other peoples horses and ponies

I resigned from my day job…