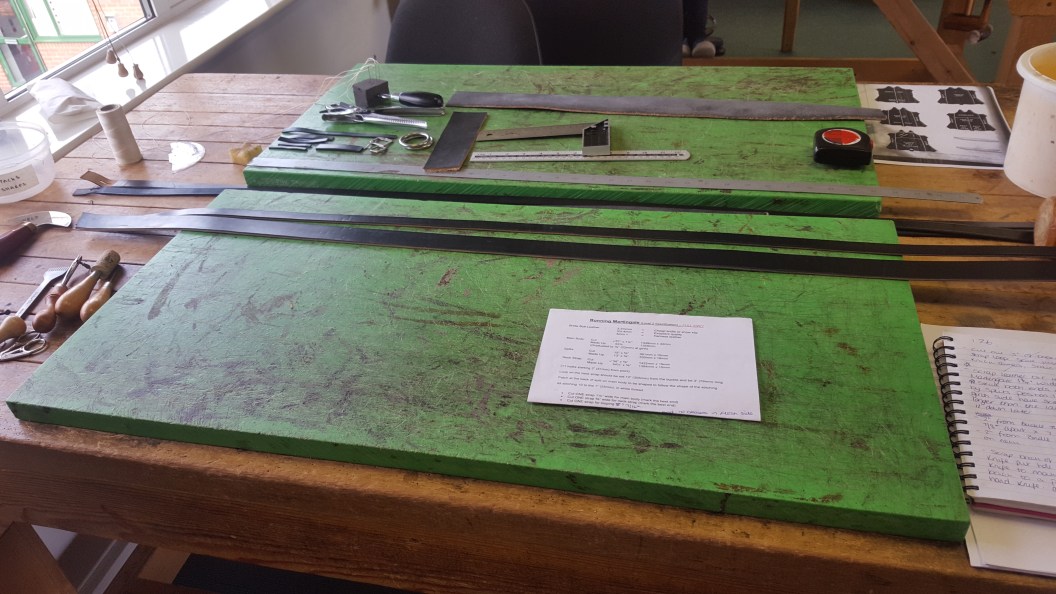 Firstly, I send my apologies for not doing a daily blog during my recent week in Salisbury. It sure was a tough week for me and I started suffering with anxiety from the beginning which just drained everything from me.

When I woke early on the Monday morning I was overwhelmed by nausea. I really wanted to curl up and sleep the feeling off but I knew I had to get up and get on the road before the morning rush. I figured I had worked myself up over the weekend and that it was anxiety setting in and nothing sinister.

Following two previous good training weeks I was advised that as long as I could complete the making of a running martingale in 4½ hours I could sit the City & Guilds Level 2 Bridle Making exam this time round and because these training weeks are not cheap to attend I was sure going to try to succeed at this. This was one of the reasons for my anxiety.

I took a steady drive down to the training centre in Salisbury which helped a lot and by the time I got there I was ready to just get on and make a martingale, not to a time limit though, just on my own, following my notes. So the rest of Monday was taken up making a running martingale.

On Tuesday I finished my practice martingale and then decided to go straight in and make a martingale in the time limit. So the trainer and I syncronised our watches and away I went. I felt confident enough and started as I meant to go on, prepping the leather straps in good time and started stitching with around two hours to go but then the magic left me somewhere and time was soon against me. My phone alarm started buzzing at me whilst I was still stitching buckles on which told me I had failed my first attempt.

My trainer and I went through the martingale I did and anticipated I was a good hour behind schedule but the quality was good, so if I continued with the quality but just sped up more, I should be ok. I decided I would start #2 martingale in the morning.

Wednesday morning arrived. I set up, syncronised watches with my trainer and then got to work on my #2 martingale. I remember looking at the clock after I had prepped the second martingale and realised I had done it 30 minutes sooner, that was fab, right…? WRONG! This time I lost time on my stitching, especially the ‘fish’ design where the splits meet the girth strap. I figured my awl was not sharp enough which meant it dragged on the leather too much slowing my hand stitching down. I had a buckle and two running keepers left to do when the phone alarm started buzzing at me as well as the finishing process. I was GUTTED! I had FAILED…again 🙁

I returned to the B&B that evening feeling absolutely useless, I was crushed and felt like a failure. I so wanted to pass the exam this week so that I could get straight onto the Level 3 which would ultimately save me money too. (The less training weeks I attend the less money I need to find). I had a rough night, not really sleeping well and woke up feeling nauseous again. My anxiety had returned but my appetite disappeared. I did force a little cereal down me before setting off to the training centre for the fourth time.

I was determined to leave this week passing my martingale exam completing the two required written papers and starting Level 3 work. The quality of my work was good, too good probably for Level 2 but I always want to do the best I can. It was then I realised that in order to pass this exam I needed to sacrifice a little of the quality for the need for speed.

So Thursday morning started with attempt #3. I prepped the leather in record time beating my two previous attempts and therefore got onto the stitching really quickly. I got to the ‘fish’ design and remember looking at the clock and thinking ‘I’ll give myself 20 minutes to stitch this fish’; I did it in 30 mins. I then had just the girth buckle and two running keepers to stitch before finishing off the edges and polishing.

I did it! I was 36 minutes early too. How did that happen? I took a final look at the martingale improved on a couple of areas and then stopped the clock. I did it with minutes to spare.How happy was I?! I went out that night for a meal with one of my training buddies and had a very large glass of wine to celebrate.

Friday morning soon came round and my appetite returned with it. I spent the morning sitting the Health & Safety exam paper which consisted of 11 questions and then the Level 2 Bridle Making exam paper which consisted of 15 questions. I don’t like exams normally but I felt like I knew the answers and had answered them to the best of my knowledge. I felt confident enough to think I had reached at least the 70% required for the exam papers.

I had to also return my previously made headcollar and snaffle bridle which along with the running martingale was to be assessed later on Friday.

I’m happy to report I passed my exam. What a relief, now I can go on to level 3 Bridle Making. 😃🐎👍

Why I abandoned my Social Media Accounts.