A Journey Of Self Discovery, Business and Family Life.

It has been almost a month since I was on my first week of training at the Saddlery Training Centre in Salisbury. 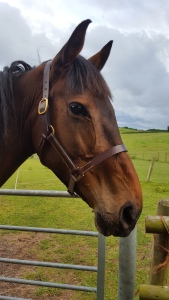 Not much has happened since then other than show my head collar off a little that I made (as well as try it on Rouxb); I have been trying to get the necessary tools, off eBay, that I need in order to complete my bridle at home so I will be ready, I hope, to do the assessment in July but this has been difficult…

…what I haven’t told you all yet is that in February 2016, almost two months after being accepted onto my Saddler training scheme, my husband lost his job of 13 years, but also to make things even harder for him he was temporarily suspended from driving in December 2015 due to a diagnosis of possible sleep apnea, pending tests.

It wasn’t a major deal at first as I was able to do the school runs and generally be ‘taxi’ in between working at the school. Hubby signed on and was hopeful in finding a new job. How wrong were we? It’s now June and he hasn’t even been called for an interview for one of the 100s of jobs he’s applied for. We can only think that due to him not being able to drive and the fact that he would have to be taken on on the higher bracket of national minimum wage he’s an undesirable candidate in this current job market. He even took up cycling in a bid to become mobile but alas the interviews still cease to exist.

All this has been a bit stressful for me as we have had to juggle finances in order to keep a roof over our heads and food on the table with just one measley wage and a job seekers allowance, whilst the tax credit agencies work out whether we’re eligible for any support. When our rent is 2/3rd’s my wage it makes for an interesting skill to form to try and pay bills and go shopping for food. Ever tried to feed a family of four including 3 small dogs and 3 cats on £40.00? No? I challenge you to try it!!!

Here’s where my next bit of news comes in. A close friend of mine contacted me one day and told me about crowd funding and crowdfunder in particular. Basically it is an online platform whereby you state your case (a project) which you are passionate about and ask people to make a contribution towards a monetary target in order for the ‘project’ to get off the ground. In return the contributer is able to choose a ‘reward’ for their contribution. This can range from a simple thank you email to a product or service that equals to the amount of the contribution.

I’m a hard working and proud person usually and this asking for money lark is alien to me unless I give something back. That’s why I have stuck with this crowdfunding idea as I will be able to offer a leather made good in return for a contribution making it an equal partnership rather than just accept handouts.

I wonder what your feelings are on this? Your opinion will matter as it is you guys who could help me spread the word. I am also looking for 3-5 volunteers who I can work with (from the comfort of our homes) to get this project off the ground. If you would like to get involved I would love to hear from you by emailing me at [email protected]